It seems amazing, but in a little over 3 weeks, this decade ends and a new decade begins.

This is a good time to review, reflect and learn from what has occurred in the past, as well as share some insights about the future.

This is the first of a series of blog posts we plan to write reflecting on various aspects of the past decade and the future.

Ten years ago, the US and the rest of the world were just beginning to come out of “The Great Recession,” which was caused by the US housing bubble and led to the global financial crisis of 2008-09.

One of the major lingering impacts of the Great Recession has been that interest rates and inflation have been at historically low levels over the past decade.

You may think interest rates are low today, but let’s really put this into perspective.

What do you think the yield was of the 10 year US Treasury Note ten years ago, during January 2010?

Think about this for a minute. The U.S. economy is doing pretty well today. While other parts of the world may not be doing as well, the world economy is certainly not going through anything like the global financial crisis that occurred in 2008-09.

So what do you think the 10 year US Treasury Note was yielding in January, 2010?

While US and global economies have improved significantly over the past 10 years, inflation has been very low and interest rates have dropped. In many other counties, interest rates are actually negative.

What do we think are the causes and thoughts about the future?

This has not been an issue, as inflation has been so subdued over the past 10 years. One clear cause of this has been the impact of technological changes like fracking on the global oil and energy supply. In previous decades, such as 1973-74, the rise in oil prices caused high inflation and high interest rates. As we have written previously, the technological improvements in oil and natural gas production has put what appears to be a cap on oil price increases. Oil prices have traded in a range since 2015, which has been a key factor in low inflation.

We often say….you should focus on things that matter and things you can control, per the great sketch by Carl Richards. In this case, we cannot control the future of interest rates or inflation. For planning purposes, we assume that interest rates will remain around current levels going forward. Though we would not have assumed these current low interest rates ten years ago for now, there is nothing on the horizon to indicate much higher interest rates will be returning any time soon. 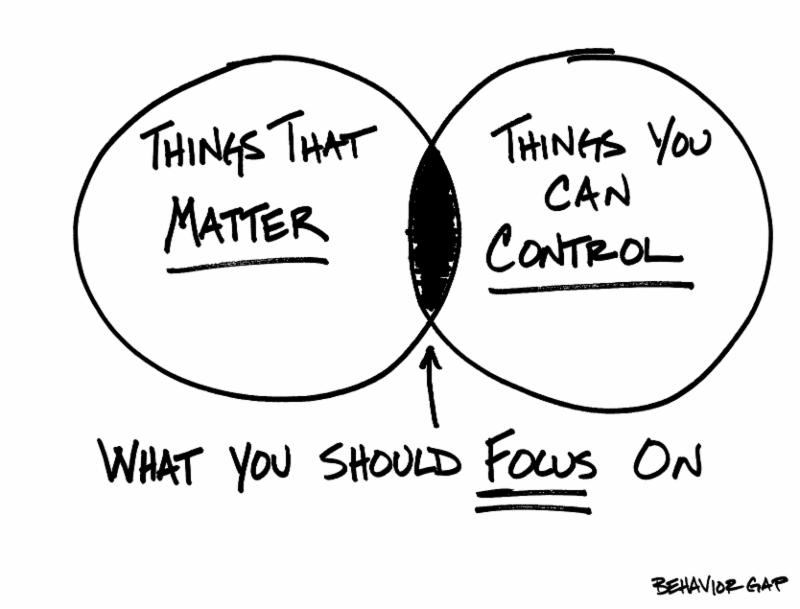 Our blog post dated March 17, 2010, Fed Actions: What Does it all Mean, still very much applies today. “As advisors managing fixed income portfolios, we do not make predictions about the direction of interest rates…to attempt to do that is nearly impossible, particularly over a long period of time. We would prefer to build a diversified portfolio of very high quality fixed income securities, of varying maturities, so that we will get the interest rate return of the market, and not risk losing money by betting on the direction interest rate moves.”

We know that is it very difficult to predict or guess the future direction of interest rates.

We are not going to play a loser’s game, or one that would be unnecessarily risky, by trying to place bets on the direction of interest rates with your fixed income allocation.

At the same time, we realize that the fixed income portion of your portfolio is not earning much, compared to certain time periods in the past. The rate of return on fixed income is low, in actual terms, as well as what is called the “real return,” which is the yield less the inflation rate. For example, if your fixed income is yielding 3.5% and inflation is 1.8%**, then the real return is 1.70%.

Unfortunately, due to this economic reality, to grow your assets net of inflation, you must take risk in stocks, as high quality fixed income securities are only earning 1-2% greater than the inflation rate. And this does not include income taxes on the earnings.

Though interest rates are low, we want to caution you to not increase your stock allocation unless you truly have the need, ability, willingness and time horizon to take on the extra risk that comes with owning more stocks. This is where talking with us, and planning, comes into play. In our role as your guide and advisor, we want to help you determine what is the appropriate balance of fixed income and stocks for your individual or family’s specific circumstances and goals.

We recommend that you factor in lower rates of return on fixed income, when you consider your financial future.

This means you may need to save more, as your fixed income earnings may be less.

It means you should generally not pay off a low interest rate mortgage early, as that is a significant “asset.” If your mortgage is higher than 4.5%, you should consider refinancing.

There are many implications to lower interest rates. Some are good and some are bad. We can help you to deal with this.

Please talk with us. We want to help you plan for your future.

Give Thanks Looking back and forward, Part 2
Scroll to top