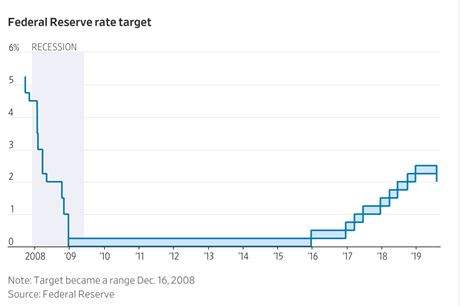 As we have explained before, the Federal Reserve has a dual mandate to foster maximum employment and price stability, which they define as inflation of around 2%.

Jobs gains have been solid in recent months and the unemployment rate is low, at a 50 year low in fact. Consumer spending is solid and growing, but the “growth of business fixed investment has been soft.”*

The Fed feels that inflation, other than for food and energy, are running below 2%. They feel this is not good enough, as if an economy was expanding and doing even better, market forces have historically caused inflation to grow at 2% or above. By cutting short term interest rates to stimulate the economy, they want to slightly increase inflation to 2% or above.

The Federal Reserve in their statement Wednesday cited “implications of global developments for the economic outlook as well as muted inflation pressures” as reasons for the rate cut.* We feel this means concerns about economies outside of the US, as well as negative effects of the ongoing trade tensions.

We are not sure if these actions were completely warranted by the Fed at this time, but they can be viewed as a preventative step to keep the economy strong and possibly to avoid any further weakening. I had written that sentence after the Fed’s written statement was released and later, in his press conference, Chairman Powell said “there is definitely an insurance aspect” to the rate cut.**

The Fed also said that “uncertainties about this outlook remain.”* This does not surprise us, as we feel there always will be uncertainties of some type. No one, including the Fed, can anticipate the future or what unpredicted events could occur that will impact the future of the US or global economy.

As the Fed’s outlook was uncertain, it caused them not to clarify or signal their future moves. What the Fed did not clarify, which the financial markets may find troubling, is guidance regarding future interest rate moves. Chairman Powell was not ready to confirm that more cuts are imminent, as if this was the beginning of a multiple rate cutting cycle. He said “that’s not our perspective now” in his press conference after the statement was released. This does not mean that there will not be future cuts, it means they don’t know yet if there will be more or how many. Powell viewed the Fed actions as a “mid-cycle adjustment” to monetary policy to help the economy perform as the Fed desires.**

In a technical move, the Fed will also stop reducing the bonds which they hold, two months earlier than they previously stated, which is also a loosening of credit policy.

US interest rates are quite low now, and longer term rates have been dropping. For example, 30 year fixed mortgage rates, which at one point neared 5% in the past year, are now around 3.75%.*** You should consider refinancing if you have a mortgage that is above these levels.

The US faces the challenge of lower interest rates throughout the rest of the world, as there are now at least $13 trillion of dollars of bonds issued outside of the US that have negative yields.**** This is one factor, though not stated, that may have impacted the Federal Reserve’s decision to lower short-term interest rates.

It is important to note that the Federal Reserve is supposed to act independently of any political pressure and make their decisions based on data they observe and their economic training. They are to act in the best interest of the US economy, to achieve their dual mandate stated above. Powell reiterated in his afternoon press conference that this move was not politically influenced.

We do not anticipate or recommend any changes to your investments or Investment Policy Statements as a result of these actions.

We hope this analysis is helpful to you, and provides you with clarity and information that is understandable and timely.

If you would like to discuss your specific situation, in lieu of this news, please contact us. That’s what we are here for!

Why can’t I watch CBS on my TV? It’s that time of year……again
Scroll to top