How to be better investment advisors.

These were some of the topics of the 2018 BAM National Conference which I attended, along with Michelle Graham of our firm, over the past few days.

We heard from Alison Levine, who in 2002 was the captain of the first American Women’s Mt. Everest Expedition.  Her presentation was filled with many leadership and life lessons, which can also be applied to investing. In building her team, Levine said the members’ techniques and ability were important, but willpower was the most important factor. To be a successful long-term investor, you will need to have willpower to endure down markets (such as we are experiencing right now), willpower to ignore the constant noise and financial predictions and willpower to stick with your financial plan (investments), even when they temporarily underperform some other stocks or asset classes.

Levine stressed the importance of confidence. She had to know that each of her individual climbers were confident of their ability to have a truly confident team. As your advisors, we are confident about our consistent investment philosophy. As a client, we want you to be confident in our investment strategy and philosophy, so you can adhere to it for years and decades.

To make this attempt to climb Everest, the American Women’s Mt. Everest Expedition required extensive planning, training and financial support. This was not a one person effort. The Women’s trip was sponsored by the Ford Expedition and not the Chevrolet Avalanche (get it?) …as both wanted to sponsor the venture. 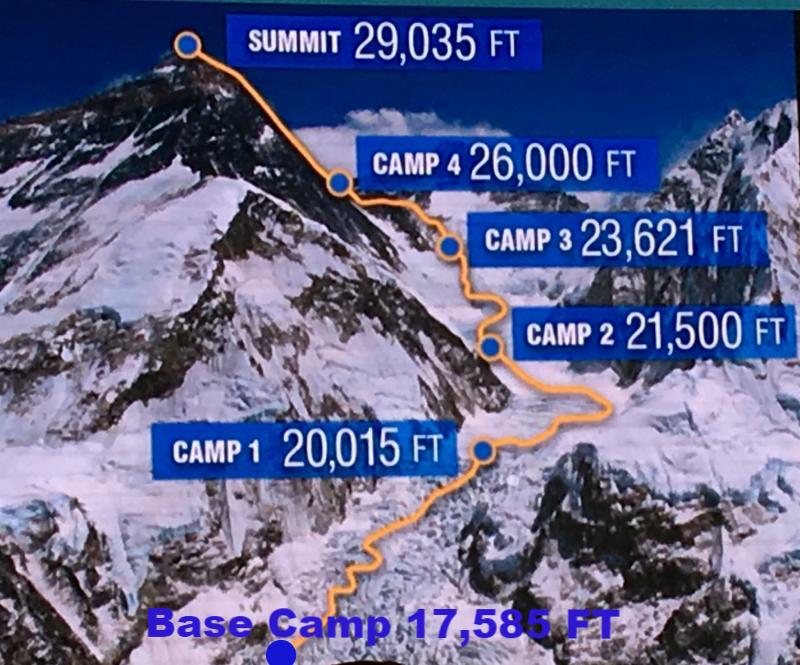 Various speakers discussed how risk and return are related, which of course we know.

Levine’s 2002 attempt did not make it all the way to the final summit. She was 28,704 feet above sea level, but due to storms that quickly developed, they were unable to trek the final 331 feet up to the peak. Did they fail? No! They had to make smart decisions. It was better not to take extra risk, in order to return …and live. That is the ultimate risk and return!

She returned to Mt. Everest in 2010 and finally made it all the way to the summit. She said she could not have done it without an extensive support team and the crucial experience she gained from her 2002 venture. We are part of your support and advice team. We have extensive experience, rely on market and academic data, and behind us, we have extensive resources that we can rely on, as needed.

We agree that risk and return are related. We discuss this with you, as we develop and evaluate your portfolio over time. One speaker expressed that due to US S&P 500 valuations as of September, 2018, the future expected returns for this asset class are quite low going forward, well below the historic average of 8-10% per year. He may be right, but there is no way to know. None of us has a clear crystal ball about the future. However, we disagree with his recommendation to invest in alternative investments which we find hard to understand, use leverage and make bets by shorting certain stocks (betting they are over priced and will go down). Some speakers advocated adding alternative investments to try to reduce the overall risk of a portfolio or to increase the expected returns. As of now, we are not in agreement that the risk of these alternative investments are worth the potential return. We are open to new concepts and ideas, but we must be confident in them before we invest our money and recommend them to you.

We also heard from another speaker, who spoke from the view of an investor.** He shared how years ago, it was difficult for him to deal with uncertainty, noise and the constant barrage of media predictions and warnings. This was before he began using his current advisory firm (not WWM) and investment philosophy, which is likely similar to ours.

He talked about how important it is for us as advisors to be good listeners. He stressed values that are similar to ours, such as “doing the right thing” and “doing it the right way.”  He discussed the importance of treating each client as an individual and understanding your personal emotions and feelings about money, as well as sharing our personal money stories. I plan to write about these topics in future blog posts and we will discuss them in client meetings.

He said that by working with his advisor, he became more comfortable with the uncertainty of the financial world. He began to tune out the noises. He worked with his advisor to make better financial choices. He realized that he can only control what he can control. He now knows that as a long-term investor, the investments and decisions he makes today will compound over time for great future benefits. He doesn’t know exactly how this will work out, but is confident that over the long term, he feels this is the correct philosophy to have.

We strive to provide the type of guidance and advice that the speaker described, so that our clients can also feel this way.

The speaker feels transformed by the relationship he has with his financial advisor. He refers to himself as a transformed investor. As a result of his new mindset, he is much more willing to refer his friends to his advisory firm, so his friends can be helped by his advisor and feel the way he does.

If you are a client, we hope that you feel this way about our firm, so when the situation arises, you can help your friends and relatives by referring them to us.

If you are not a current client, but want to have this type of investor experience and relationship, let’s talk.

**The speaker is not a client of our firm or BAM Advisor Services (our back office firm), so this is not intended as any form of client testimonial.